All posts Introduction to Data Structures 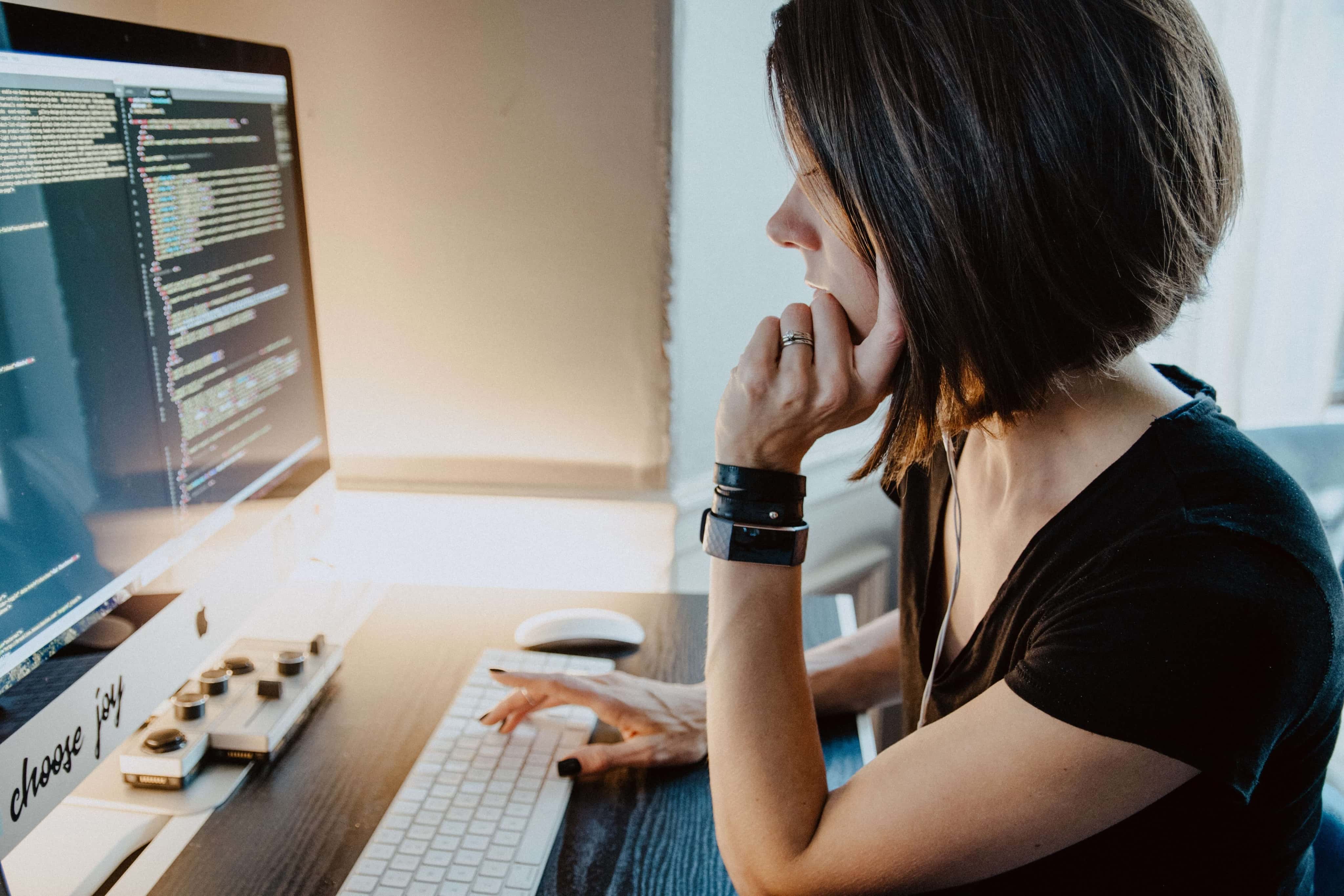 Each application needs to store information temporarily or permanently, for example, the data of a person, the measurements were taken on a machine, the detail of sales made in a warehouse, etc., for this the programming languages ​​have provided data containers that allow the information to be stored and processed according to some criteria. These containers are called data structures and can be classified into primitive and complex data structures: 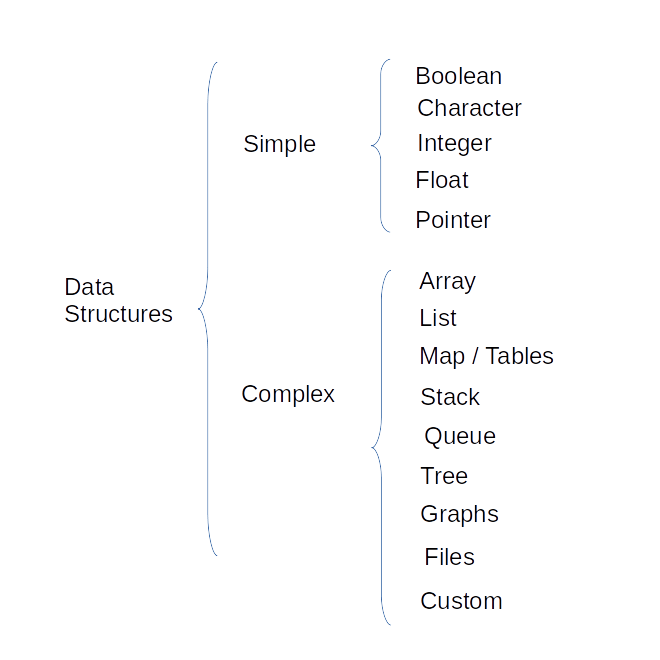 In this document, we are going to focus on complex structures.

An array is a container of predefined size n, whose elements are in contiguous memory spaces and its indexes are between ranges 0 and n-1, its uses are mainly: 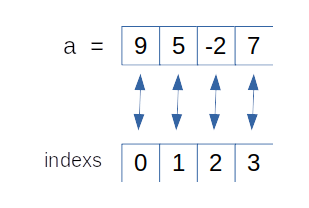 Each element is accessed through its index which starts at 0, for example the last value (7) can be accessed by index 3 like this: a[3] => 7

The definition of an array is very similar between programming languages, for example:

Arrays can have several dimensions, but more than three dimensions can make it difficult to read a program and can generate errors. A two-dimensional arrangement can be defined as follows:

Each language provides several alternatives to declare arrays, however, it is always necessary to define the maximum size n of it.

In an arrangement we can find the following operations:

The main drawbacks with using arrays are:

To solve these problems, programming languages ​​have provided certain structures that allow them to be dynamically modified, such as: Slices, Maps in the case of Golang or ArrayList and Vector in the case of Java, among others.

Its main characteristics are:

A Slice can be declared in the following way:

Its main properties are: capacity and length, the length of a slice is the same as the length of an array and can be found using the len() function, the capacity can be obtained using the cap() considering that Go automatically doubles the current length every time it runs out of space to store new items, this can be inconvenient if it is a large slice as it may take up more memory than expected.

In the case of Java, it is possible to generate dynamic arrays using the ArrayList class, which is an implementation of the List interface. Its main characteristics are:

An ArrayList can be declared in the following way:

The length of an ArrayLis can be obtained using the size() method while its capacity automatically increases starting with a value of 10.

In the case of lists, the most obvious difference is that its elements are not found in contiguous spaces of memory, however each element (known as a node) knows the location of its next value, one of the main advantages of Lists over Arrays is that lists allow you to dynamically change their size, allowing you to increase or decrease their size according to your needs.

Each node uses at least two memory spaces, one to store the current data and the other to store a pointer to the next element, thus creating a sequence of elements that generate the list. The first node in the list is known as the head while the last node is called the tail.

The use of linked lists has great advantages: they are easy to understand and implement, they are generic enough to be used with more complex structures and the search process in them is fast, however, once a node is reached, it is not possible to directly reach the previous node, in order to solve this, it is possible to use an implementation called Doubly Linked Lists which allow solving this problem.

The implementation of a linked list requires the creation of a structure that represents a node, this structure must contain a value and a pointer to the following element:

From this structure, its possible define operations such as:

For example addNode can be defined as follows:

In the case of the method addNode the implementation can be similar to the following:

An example of using the LinkedList class is:

Maps and HashTables are equivalent key-value structures, their main characteristic being the use of an identifier (key) which will have a value associated with the condition that this key must be unique and differentiated from other keys. 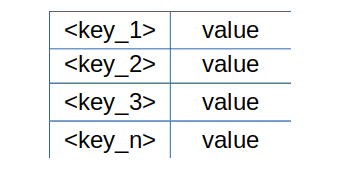 The performance of this structure depends on the following factors:

Go does not exclude any type of data to be used as a key, the only condition being that key values ​​can be differentiated from each other. Your definition must follow this format:

This structure is faster and more versatile than arrangements and slices, being very convenient to use where a key/value structure is warranted.

In Java, Map is an interfaz of key-value type which in turn is implemented by several classes such as: HashMap, HashTable, LinkedHashMap, TreeMap among others. In the particular case of HashMap the use of null values ​​is allowed as well as null keys, this class is equivalent to Hashtable except that it is not synchronized. It is important to indicate that the order of its elements is not guaranteed to remain constant over time, it should be noted that the objects used as keys in a Hashtable must implement the hashCode and equals method.

The main characteristic of a stack is that its elements use for its processing the technique known as LIFO (Last In First Out), which means that the element that is stored at the end will be the first element to be obtained by the stack.

The basic operations carried out on batteries are:

A possible implementation of Stack methods can be:

The implementation of stack methods in java can be done in the following way:

Java provides the Stack implementation that contains the necessary methods for the process in LIFO form.

The queues follow the FIFO (First In First Out) mechanism to store and obtain their values, this means that the first values ​​to be inserted in a queue will be the first elements to be returned.

The basic operations carried out on queues are:

The implementation of a queue in Golang requires the definition of a node type structure and the push and pop methods mainly.

From the existing structures in Golang it can be highlighted that the implementation “container/list” can solve the use of queues.

The implementation of the previous algorithm (queues) can be done as follows:

Java provides queue implementations through the classes that implement the Queue interface such as:

Who provide the necessary methods to add and get nodes to a queue.

A tree is a hierarchical structure that consists of the union of vertices (nodes), used as storage in complex algorithms in various fields such as indexes for storage in databases, Artificial Intelligence, among others. 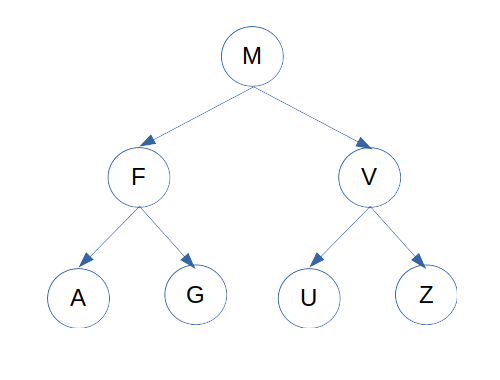 For its operation, the trees handle a certain thermology that is important to define:

There are several types of trees which have a specific use, among the common ones we have:

A graph is a set of nodes connected in the form of a network, its nodes are called vertices and a pair (x, y) is called edge which indicates that vertex x is connected to vertex y. A border can contain weight and cost, which represents the effort required to traverse from one node to another. 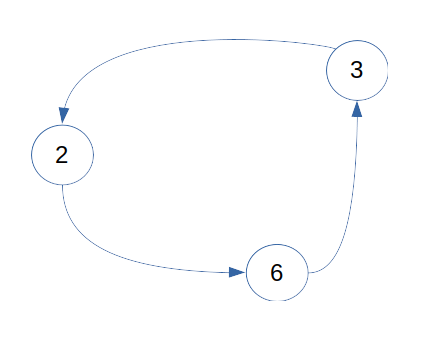 Graphs can be of type:

This structure is a collection of records that can be obtained or stored in secondary storage devices, in general this type of structure is used once has been a previous process where other data structures are involved, for example, the student registration process or the payment of fees for the purchase in a commercial entity, that process generally result in storing this information on files.

Each language has implemented different ways of processing files, for example Golang has defined in the package “os” and “io” functions that allow open, read and store information, for example a file can be opened using the Open function:

Similarly in Java you can have the following:

This type of structures are created by the developer responding to the need needs to be modeled and implemented, it can be composed of other simple and complex structures without there being a real limit in terms of the number of elements allowed in them. Each element of the structure is called a field or attribute depending on the type of language used, but finally it represents a characteristic of the modeled entity, for example, a person can be defined by its main attributes such as: height, weight, eye color, name, gender, city of birth, countries you have visited, etc.

Each language has implemented a way of handling this type of structure, so for example in the case of Golang you can use the struct type to create custom data types, for example:

A structure, in turn, can be made up of other structures, which allows the modeled entity to be represented in a real way, for example, the person attribute has been defined as a map whose key is of type string and where an alphanumeric id could be stored by example and whose value is a person type entity, this would allow to represent the members of a family. Another similar attribute in the workplace, which in this case allows you to store an entity of the employer type if it exists or nil (null value) if it does not exist.

The representation of structures in particular to the language, for example in the case of Java the use of classes is necessary to reproduce the same effect:

The API’s and complete code examples can be found on the following resources: