All posts What is Diffie-Hellman? 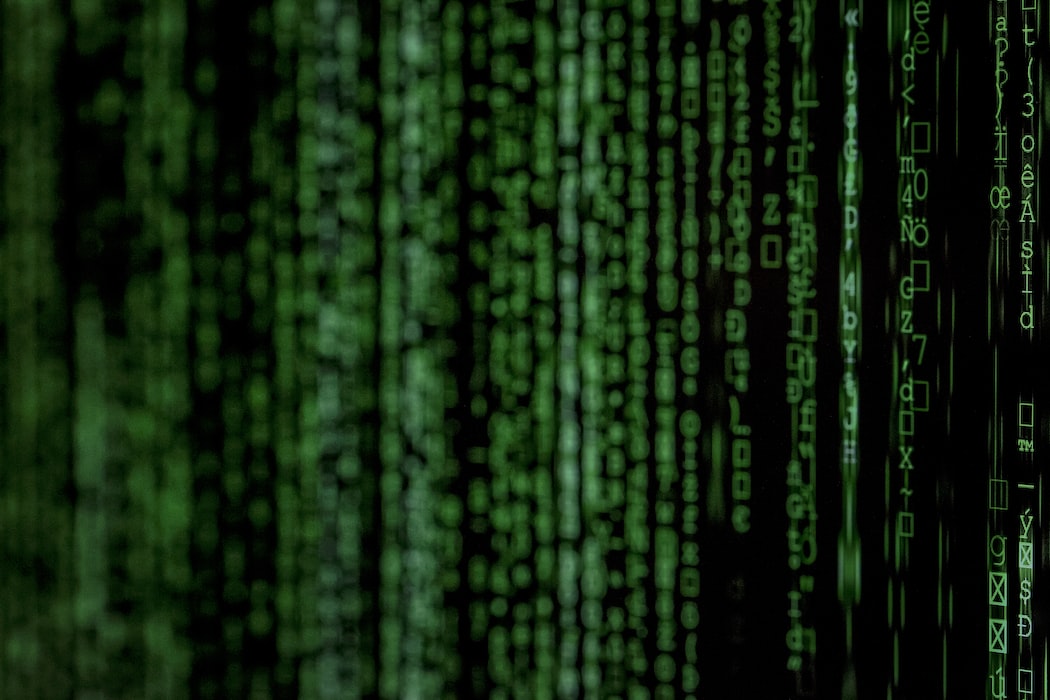 Communication is one of the fundamental pillars of humanity since its inception.

Communication is one of the fundamental pillars of humanity since its inception. However, inherent to it we find that the need to protect our third party messages is also a fundamental requirement. For this historically we have resorted to several methods, for example, the encrypted ones: Atbash, Scytale, Caesar, ROT13. 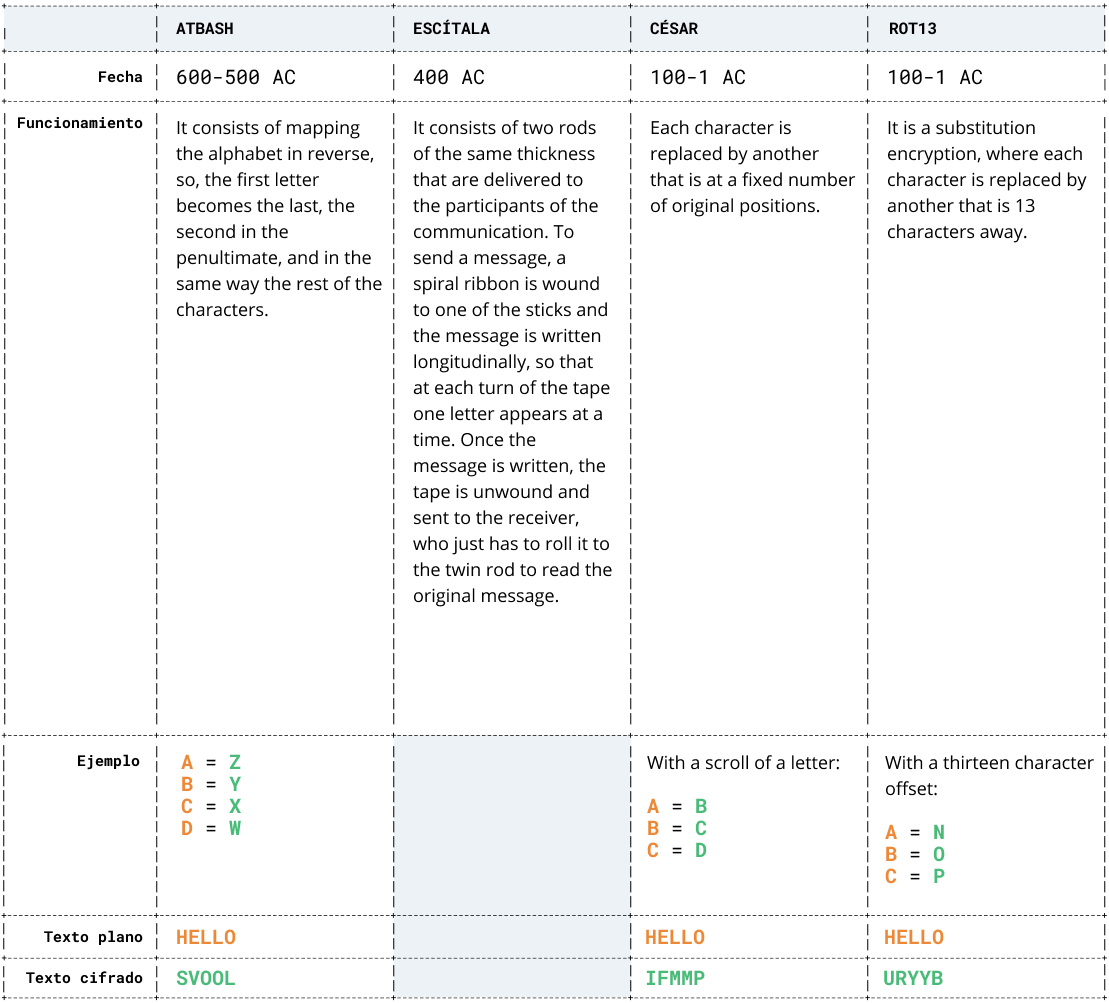 These methods have a common characteristic: it is necessary to know in advance the “key “ with which the original text could be obtained from the encrypted text. For example, the number of characters used for the displacement or the length and width of the wand to roll the tape or the corresponding character by which the original text should be replaced. This was a basic premise of these protocols.

In 1945, Claude E. Shannon (considered by many to be the father of mathematical cryptography), wrote an article called “A mathematical theory of cryptography “ that was published by the Bell System Technical Journal in 1949. It is commonly accepted that this paper was the beginning of modern cryptography, Shanon identified the two main objectives of cryptography: stealth and authenticity. Shannon’s work influenced the crypto research of other authors including Whitfield Diffie and Martin Hellman.

Subsequently, other types of protocols were implemented. Its main division is established as:

Taking into account that the encryption and decryption key are different, to decrypt the message Bob will use his private key:

The first researchers to find and publish public key cryptography ideas were Whitfield Diffie and Martin Hellman of Stanford University, along with Ralph Merkle of Berkeley University. They were working independently on the same problems until they met and started collaborating.

The first work published in Public Key Cryptography was in the paper called “New Directions in Cryptography” in November 1976, version of IEEE Transactions on Information Theory. This paper represents the main ideas of Public Key Cryptography, including the generation of digital signatures and showed some algorithms for its execution, revolutionizing the world of crypto research, which until then was controlled in the confines of the government. Diffie, Hellman and Merkle subsequently obtained patent number 4,200,770 corresponding to their security method.

Diffie-Hellman is a mathematical algorithm that allows two parties to produce a shared secret even though they have never been communicated before. Diffie-Hellman is widely used in various applications to encrypt data, for example: SSL (Secure Socket Layer), TLS(Transport Layer Security), SSH (Secure Shell) or VPN (Virtual Private Network).

This can be explained in a fairly graphic way through colors: 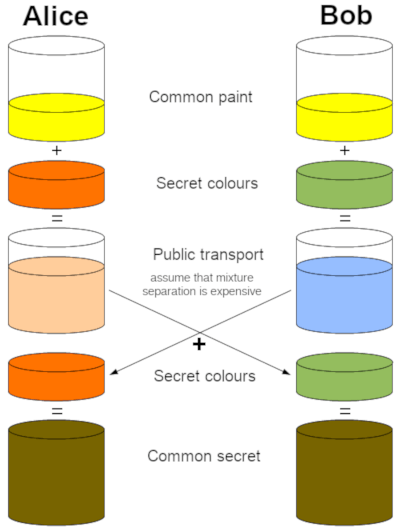 In this image you can see the following:

P is a prime number and G is a predefined non-random number for example:

The parties choose the keys a and b considering that no one discloses it publicly. Ideally, these numbers are memorized and are not written or stored anywhere, then the parties calculate the public keys A and B according to their personal keys. 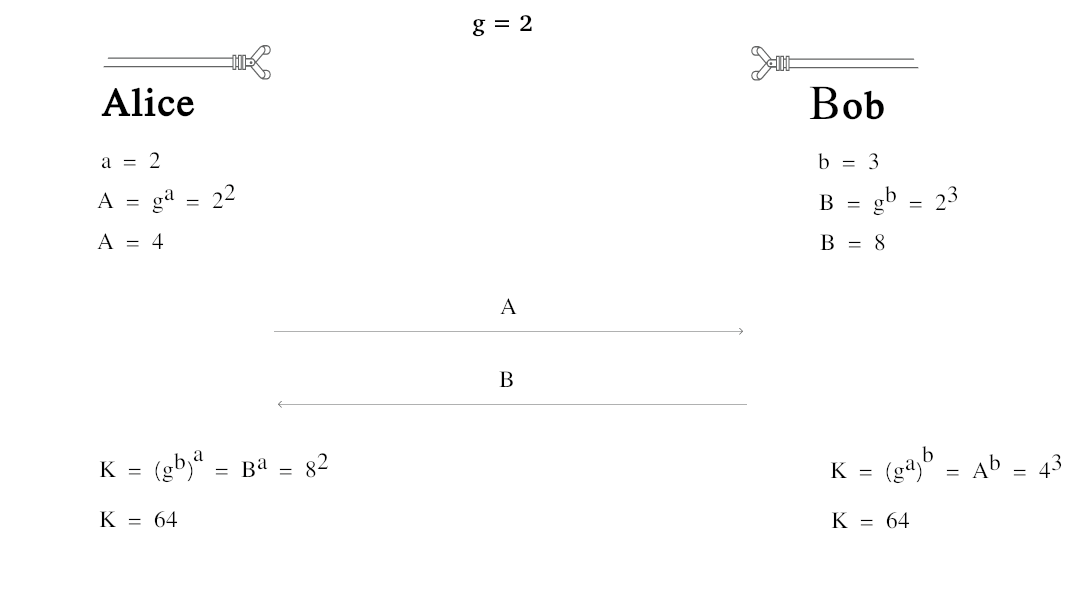 The K secret key is calculated individually for each part.

Man in the middle

The weakness of this algorithm is that the exchange of Diffie-Hellman keys does not implement member authentication. Possible solutions are the inclusion of digital signatures and other protocol variants aimed at peer authentication. This way Alice will be sure to talk with Bob and Bob with Alice. Another possible solution is to discard the keys after using them so that they cannot cause future problems. 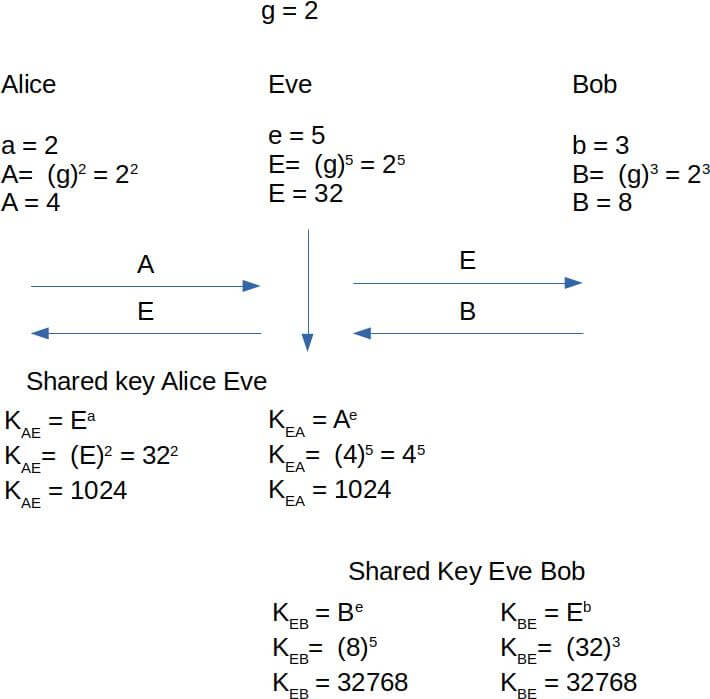 Image 5. Man in the middle

The Diffie-Hellman encryption algorithm forms the basis of modern cryptography. It allows the development of various tools and technologies. Additionally, it makes security in the encryption process and not in the key.